While everything in Kyiv is locked down due to Coronavirus quarantine in Ukraine and worldwide, and many of you can’t enjoy exploring Kyiv right now, I offer you to look at some awesome films, cartoons, documentaries, commercial or music videos filmed in Kyiv. Stay home and enjoy Kyiv on the screens!

Nominated for Oscar, Winter on fire shows how over 93 days peaceful student demonstrations turned into a violent revolution and fight for the freedom.

In this documentary about Euromaidan 2014, you will see the revolutionary Kyiv and citizens of Ukraine during the severe winter on fire.

Winter on Fire is available on Netflix and is an absolute must see for those who want to learn more about Revolution of Dignity in Kyiv.

HBO Chernobyl series not only had a huge success massively increased the amount of tourists taking Chernobyl Tours. Though the power plant was filmed in Lithuania, a lot of other moments were filmed in Kyiv.

Podil, Obolon, Khreshchatyk and even far away Troeshchyna appear in HBO Chernobyl. Part of the Kyiv centre was closed for the cars and pedestrians in June 2018, when HBO Chernobyl was filmed.

The model of Chernobyl power plant that people can see in the series was made by Postmodern Digital Studio in Kyiv.

It could be much more of Kyiv in HBO Chernobyl series, but Ukraine does not have tax incentives for foreign filmmakers, which made filming in Lithuania much more appealing.

The first episode of 23 season of Simpsons is dedicated to Ukrainian Mafia and its “Godfather Viktor”. Ukraine and Kyiv appear in Simpsons, thanks to our pro-Russian ex-president Viktor Yanukovich, who is shown there as main mafiosi.

Watch Simpsons to see Maidan Square near Dnipro river, Kyiv Pechersk Lavra on the other side of a river and Paton Bridge.

Though do not be surprised if you see a bit strange name of our country, spelled as Ukreign. Yes, it’s still us.

The commercial of Sony PlayStation 4 was filmed in Kyiv by Radioactiv Film Production. You will recognize the area around Palats Sportu metro station, the parking of Ukraina shopping and entertainment center and the surroundings of Kyiv Polytechnic University.

You will see the characters of iconic video games on the some of the most popular places in Kyiv.

300 persons of extras and 23 stuntmen took part in the clip shooting for  Sony PlayStation.

The Apple Airpods Commercial is depicting some of the Kyiv locations, such as Antonovycha street, Constitutional Court, unfinished high-rise building at the corner of Antonovycha and Zhylianska streets.

The main character of Apple Airpods Commercial wears the earphones and starts bouncing the city that turns into trampoline: all the streets, roads, pavements, hatches, columns and walls become elastic.

Shot in black and white, the commercial makes the Kyiv locations even more appealing. 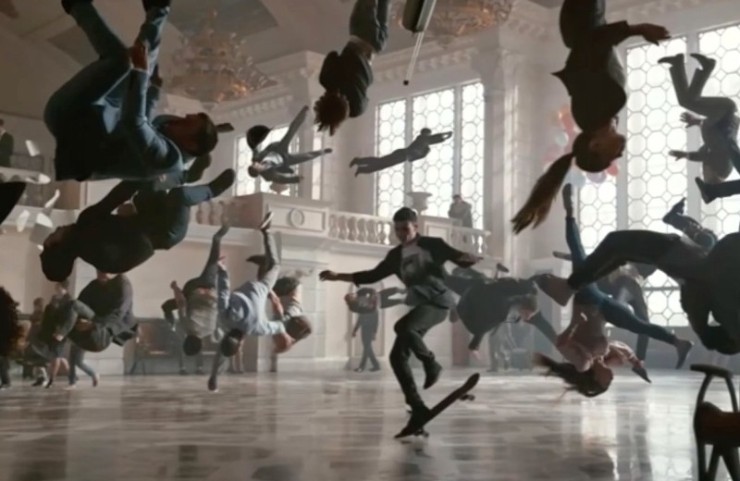 The video advertising Apple Watch 3 was filmed in Kyiv. The main shooting locations are Kyiv Railway Station and Zoloti Vorota metro station. Once the video starts, you can hear the announcement from Kyiv Railway Station, made in Ukrainian language.

In the video, the main character is skate-boarding around Kyiv Railway Station and listening to music with the Apple watch 3 and wireless earphones.

The clip of a famous American pop-star Miley Cyrus “Nothing breaks like a heart” was partly filmed in Kyiv.

According to the plot, Miley Cyrus is running from the police in one of American cities. The scene of chase was filmed at Kyiv Darnytskyi Bridge. While the fans of the singer were happy, the locals of the left side of Kyiv – not so much: the traffic on the bridge was limited for two days.

Famous car company BMW filmed one of its commercials in Kyiv.

Some of the scenes were filmed at luxurious Lypky district.

The popular British band Hurts is one of Kyiv’s most favorites – the tickets for Hurts concerts in Kyiv are usually sold out. The band filmed the Wings video in Kyiv: among locations – a couple of Kyiv hotels and a viewing platform on the roof of the Parus Business Center.

The video for Beautiful ones by Hurts was also filmed in Kyiv. The band called this provocative video the celebration of individuality.

Foals – What went down

What went down by Foals was also filmed in Kyiv. The main location for shootings was Troyeshchyna district with its panel high-rise buildings (together with the surrounding wastelands). Another location for video shooting – Dnipro Bay.

The video for one of the most popular songs of Coldplay – Up&Up was partly filmed in Kyiv. According to the authors of the video, three days of shooting were happening in Kyiv, and one – in New York. The incredible graphic for the video was made by Gloria FX Studio from Dnipro, Ukraine.

The video Lonely together by Avicii and Rita Ora was also filmed in Kyiv. Avicii was posthumously honored with Best Dance Music Video Award on MTV.

One can see the Rybalsky bridge, Hryshko Botanical garden and Park of Victory in the video. “Lonely Together” was also nominated for the best visual effects category. The video was produced by Kyiv Postproduction Studio.

If you decide that watching Kyiv on the screen is not enough – welcome to see it all in real. I’d be happy to guide you around on one of my alternative Kyiv tours – once the quarantine is over, of course. Till that, stay healthy and safe, and, most importantly, stay at home!